Some rumors have surfaced 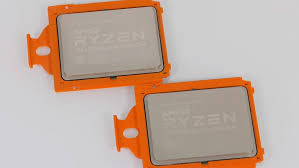 Split into two main bins, X and WX series The X series for the Gamers, they mostly have up to 16 cores. The WX series start at 16 cores and are specifically made for workstations, these are the that power the needs of inventors and creators. Based on the  12nm ‘Zen+’ architecture that present with 2nd Gen Ryzen CPUs, Socketed in the TR4 socket and supported on existing hardware with a BIOS update for those of us that have a supported motherboard.

Starting at the top of the stack, the AMD Ryzen Threadripper 2990WX is the 32-core/64-thread monster, the chip boasts a 250W TDP, a base clock of 3GHz, and a peak boost clock of 4.2GHz. AMD’s own testing suggests a performance lead of up to 51 percent over the Intel Core i9-7980XE

The X series are targeted at the gamers out there that want to their investments. Ryzen Threadripper 2950X, a direct replacement for the 1950X. It keeps the same 16 cores and 32 threads, but raises the base to 3.5GHz and boost clocks to 4.4GHz within the same 180W TDP.